World peace from the quantum level

“More than an end to war, we want an end to the beginning of all wars.” — Franklin D. Roosevelt

From the desk of Dr John Hagelin:

Recently I met with award-winning film director David Lynch at a conference about consciousness, creativity, and meditation. We got talking about world peace — how everyone wants it but no one believes we’ll ever get it (see video clip below).

David Lynch and I started exploring exciting new areas of quantum mechanics, neurophysiology, and human consciousness. We realized that most people don’t know how deeply their own consciousness is connected to the collective fate of the planet—or how they can use a powerful, scientifically tested technology of consciousness to help create world peace on earth virtually overnight.

More than 50 demonstration projects and 23 studies published in leading peer-reviewed journals have shown that this new consciousness-based approach to world peace neutralizes the ethnic, political, and religious tensions in society that give rise to crime, violence, terrorism, and war. The approach has been tested on the local, state, national, and international levels, and it has worked every time, resulting in highly significant drops in negative social trends and improvements in positive trends.

Large groups of peace-creating experts, practicing these technologies of consciousness together, dive deep within themselves to the most fundamental level of mind and matter, which physics calls the unified field. From that level of life they create a tidal wave of harmony and coherence that can permanently alter society for the better, as the research confirms. And this consciousness-based approach is holistic, easy to implement, non-invasive, and cost effective. (See www.PermanentPeace.org for more information.) 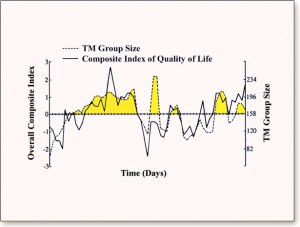 Figure 1. A critical experimental test of the peace-creating effect of large meditating groups was conducted during the peak of the Lebanon war. A day-by-day study of a two-month TM meditation assembly in Israel in 1983 showed that, on days when the number of participants (“TM Group Size,” right) was high, war deaths in neighboring Lebanon dropped by 76% (p < 10-7). In addition, crime, traffic accidents, fires, and other indicators of social stress in Israel (combined into a Composite Index) all correlated strongly with changes in the size of the peace-creating group. Other possible causes (weekends, holidays, weather, etc.) were statistically controlled for.*

As David Lynch and myself concluded, if a proven approach to create world peace is available, why not implement it right away? We all have the opportunity now to permanently change our world for the better. Why not give peace a chance?